Where does Santa Claus come from?

To Finns, the answer it’s naturally Finland. But to many people around the world, including 1.4 billion Chinese, it could be anywhere close to the North Pole.

As the “Official Hometown of Santa Claus”, Rovaniemi wanted to enhance its brand globally as a popular tourist destination and the hometown of the famous bearded man.

As the one of the most promising emerging outbound tourism markets, China was the chosen key market to target the message and reach potential tourists.

The Challenge and Creative idea 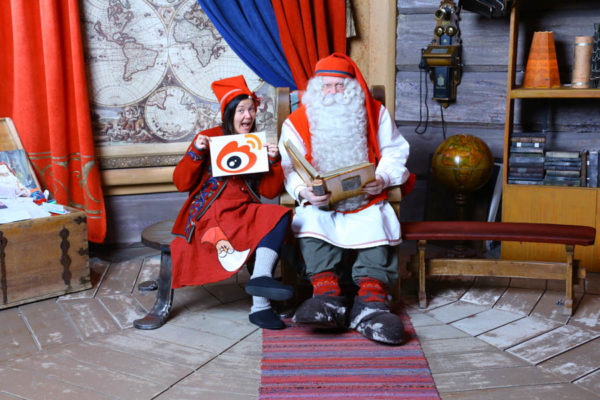 The Chinese are not too familiar with Nordic nor Finnish culture.

“Rovaniemi” is a complicated and rather hard-to-remember word, let alone a destination. Hardly anyone in China could put it on the map.

But Santa Claus is someone everyone has heard of and knows very well.

The idea was to make Finnish Santa a goodwill ambassador spreading love and care to Chinese audiences. Using Santa’s reputation, the power of story-telling and the reach obtainable with carefully crafted content on social media, we wanted to increase awareness about the fact that the Santa Claus is living in a city called Rovaniemi, in the Arctic Circle in Finnish Lapland.

We wanted to bring Santa alive and real on where the 446 million Chinese today spend their time monthly – Sina Weibo. Among Weibo’s Chinese Influencers and other international celebrities, such as Lady Gaga, David Beckham and Justin Bieber, we dreamed of having the Finnish Santa Claus to bring joy to the local people.

Using Weibo as a main channel to establish the presence of Santa Claus, we verified @SantaClausOfficial account as a real personal account – something only granted for celebrities that can prove their identity.

Due to special efforts of the team, @SantaClausOfficial Weibo account became the only verified Santa Claus personal account on major social media in the whole world.

Over the years Santa Claus has established a suitable tone-of-voice to fit the Chinese Internet culture and has a very localized approach to his content. With active community management, content production and publishing, @SantaClausOfficial account has become a loved amongst Chinese consumers but also a desirable partner over the year for big Chinese corporations, such as Alipay, to do joint campaigns with millions of people reached – tying up the ties between businesses on a whole different level in China and Rovaniemi.

In 2018, the main campaign included hosting a make-a-wish to Santa campaign by sharing the stories with the hashtag #checkinginxmas. The best wishes get a postcard autographed by Santa Claus himself, sent from the Santa Claus Main Post Office. Besides his old age, Santa Claus has also been an early adopter of technology, being amongst the first to try live-streaming on Weibo and receiving Chinese Social Media Influencers around the year to film content with him.

– Santa Claus is not a salesman, he never markets anything. He’s a well-known goodwill ambassador. He co-operates with all people, organizations and companies, but never highlights any of them.

– On Weibo, Santa Claus is present for his Chinese friends posting about his life in Rovaniemi, Lapland. Santa Claus has his special tone of voice on Weibo.

– Depending on season, Santa Claus posts 3-7 posts weekly including reposts from his visitors in Rovaniemi.

– Santa Claus interacts with his friends, but he never discusses nor debates about politics, religion etc.

– Santa Claus uses all the formats that Weibo allows: pictures, videos, stories – even live stream. Despite his old age, Santa Claus is adaptable to new digital ways of being present.

In collaboration with platform and partners, hosting online campaigns to promote the awareness of the account and Rovaniemi has proven extremely cost-effective. Some the campaign posts from different activations and Christmas-related content have surpassed the 6,7 million reach organically, beyond all our imaginable KPIs. Single posts have been shared almost 20,000 times and commented nearly 10,000 times – and they are not one-hit wonders.

The campaign “#checkinginxmas” with Weibo gathered hundreds of original posts. The hashtag page of the campaign had almost 200 million views, making it the most successful digital campaign to date for Visit Rovaniemi.

Breaking the news on Chinese Television

Our campaigns have been featured in CGTN (China Global Television Network) news online, and on CCTV (China Central Television Channel 4) program CITY TO CITY broadcasted both in China and internationally, reaching a whopping 1.64 billion audience. Other media such as Xinhua News Agency and Paper.cn also reported on Santa Claus & Rovaniemi.

Overall, the recent activities have gathered many new followers and a very active community of almost 250,000 followers on Chinese Social Media. The fans are interacting with the account on a daily basis even after the Christmas Season has passed, making wishes to Santa and expressing their interest to visit Santa one day, meeting our primary goal of making the “Official House of Santa Claus” more widely known in China. With strong actions in the social media landscape, we have further cemented the idea Santa Claus’s home belonging to Rovaniemi and Finland.  Today, we can see Chinese visitors referring to the official Santa Claus Weibo account when posting about their experiences in Rovaniemi.

Finally, what we managed to achieve with the @SantaClausOfficial account is something that goes beyond destination marketing. Fans see Santa’s account as someone they can trust and tell secrets to. The account receives personal stories publicly and privately, embodying the status of “ambassador of love and care”.